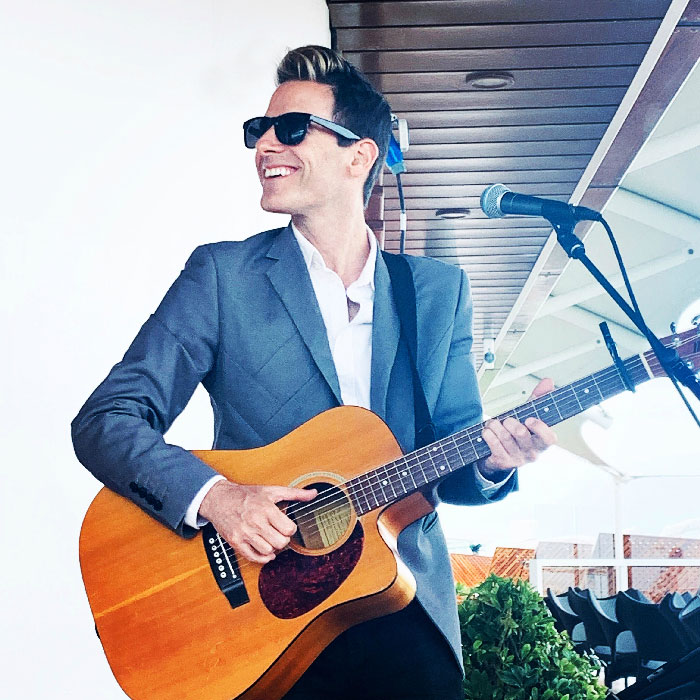 Singer, guitarist and entertainer Ron Kingston is your perfect choice for an ‘all in one’ live music solution. From Australia to casinos in Las Vegas, resorts in Asia and the Middle East, cruise ships in the Caribbean and Europe, he comes fully equipped with his own PA sound system. His 1000+ repertoire of songs range from pop, soul, classic rock, R&B, smooth jazz, country, reggae, ballads right through to hits of today’s biggest artists from Beatles to Bruno Mars, Michael Buble, Eric Clapton, Ed Sheeran, Stevie Wonder, Justin Timberlake, Adele and many more! Ron’s performance and first class PA sound & lighting system will ensure your occasions success and your event will be an unforgettable experience!

Over the course of his career, he has produced 4 solo albums and received several awards by being one of the truly romantic artists from down under. With his unique, soulful ballads that gracefully capture the hearts of listeners such as “Only You Only Me,” “Room 922” and “Make It Up to You,” Ron Kingston has proven himself as the consummate vocal professional. His song, “U-Turn,” is soothingly pensive with express romantic sentiment. At his best, Kingston’s style features an urban sophistication and subdued soulfulness.

Born and raised in Melbourne, Australia, Ron Kingston taught himself to sing and play guitar at age 13. His apparent passion for music was inspired while mimicking his favourite actors in movies and musicals. With scraps of paper he wrote and recorded original songs that would lead him to an intriguing melancholy debut album not too long after he graduated high school. His formidable years kept him busy in and out of bands with an eye and target set firmly on the international arena. With a burning desire to make great albums and trot the globe, Kingston has now been to over 70 countries.

Ron performed a record-breaking 113 shows in a row in Japan’s Summer Budweiser Music Festival and quickly sold out of his album within the first 4 weeks. In 2008, Ron Kingston performed in the Gulf for US, British and Australian soldiers serving in neighbouring Iraq and Kuwait. In 2011, while performing at Java Jazz Festival, Kingston met with American R&B recording artist Keith Martin and began working on a collection of new songs for release.

From 2013-2015 Ron toured mainland China performing hundreds of shows in Beijing, Shanghai, Guangzhou and Shenzhen which included his original songs plus popular hits. In 2016 he performed at Las Vegas casinos including House of Blues, Hard Rock Casino, Caesars Palace and many more. In 2018 Ron entertained thousands on cruise ships in the Caribbean visiting ports which included The Bahamas, Jamaica, Cuba, Puerto Rico, Mexico, Cayman Islands, Belize, Honduras and in 2019 he performed on cruise ships from the Caribbean to Bermuda and up the east coast of USA and Canada. Then the British Isles and Baltic sea performances in England, Scotland, Ireland, Denmark, Sweden, Netherlands, Russia, Finland and down through the Mediterranean from Spain to Italy. Drawing influences in his songwriting wherever his travels, Kingston continues to write and perform in some fascinating countries around the world. Ron’s music is romantically charged with refreshing melodies, sensuous grooves and distinct, smooth, soulful vocals. Download Ron Kingston’s songs on iTunes, Spotify or Amazon or visit the contact page for any enquiries or bookings.